Veegum® is a functional excipient and key ingredient for various Solid, Liquid and Semi-Solid formulations. The versatile product has played a key role in solving various formulation related issues such as taste masking, dissolution, moisture control to name a few.

This stellar product has found applications in varied types of industries such as Pharmaceuticals, Personal Care, Agro-science, Animal care and more. “If your only tool is a hammer then every problem looks like a nail,” said Abraham Maslow. We say, ‘If your tool is Veegum®, then every formulation problem has a solution!’

This article gives an insight into Veegum® and its applications in various pharmaceutical dosage forms. Let us look at some of the mindboggling functions and applications of this simple yet effective excipient in various types of formulations

What goes behind the taste masking of medicines using Veegum®?

While popping a pill, we usually come across the bitter taste and the reason for it is the bitter Active Pharmaceutical Ingredients (APIs). The pharmaceutical companies have gone the extra mile making medicines more palatable for pediatric patients, increasing overall patient compliance and brand acceptance.

The manufacturing process has seen a huge transformation in the way medicines are produced. We are talking about Veegum®, a versatile tastemasking agent. Veegum® (Magnesium aluminium silicate) – is an inert and flexible ingredient primarily used in Pharmaceutical applications.

Veegum® is a type of natural smectite clay that are processed to optimise purity and performance and are compatible with all APIs and excipients.

Where it is made?

The ores to manufacture VEEGUM® are mined in Nevada, Arizona and California, which are milled in Nevada and shipped to the state of the art GMP Certified processing plant in Kentucky, USA.

The special feature of this product is its ability to form a “House of Card” structure  around the API to mask the bitter taste of the API. This ensures that VEEGUM does not form chemical bonds with the API or other excipient but works amongst its own particles to mask the bitter taste of the APIs and thereby protecting the integrity of the drug molecule.

It is a US-DMF Certified excipient, a certification that speaks volumes about its safety, acceptance for pharmaceutical formulations and standardisation.

Veegum® has been used for taste masking of liquid suspensions and dry suspensions of widely used APIs like Azithromycin, Clarithromycin, Ofloxacin, Cefixime, Cefpodoxime Proxetil, Cefuroxime Axetil and more for a long time now and we continue to widen the use of this exceptional excipient for many other bitter tasting drugs.

In liquids, this multitasking excipient has several roles to play!

By the virtue of its ‘House Of Card’ property, it is able to entrap and hold the other particles and prevent them from Caking or Sedimenting in Suspensions this will ensure that research scientists and product formulators can now do away with the tag ‘Shake Well Before Use’ for suspensions such as Antacids, Bismuth Subsalicylate Suspension, Azithromycin, Ofloxacin, Calamine to name a few.

This same property also helps retain and trap particles of both phases (Water and Oil) in a single phase once it is mixed using an emulsifier and prevents the usual problem seen in Emulsions of “bleeding” or “cracking” (Ointments, Creams, Lotions, Suppositories and more). This is one of the most useful features of this ingredient is its ability to stabilise oil-in-water (O/W) emulsions at low concentrations.

The smectite colloidal structure effectively keeps the internal phase droplets suspended and separated. Since this structure is not affected by heat, these clays reduce the tendency of emulsions to thin out and break at elevated temperatures. Small amounts – typically 1-2 – will stabilise emulsions containing anionic or non-ionic surfactants and a wide variety of oils, fats, and waxes. 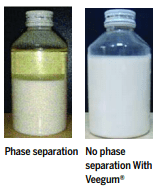 These clays are also effective in fluid water-in-oil (W/O) emulsions that are otherwise difficult to stabilise; they inhibit coalescence by increasing internal phase viscosity and by strengthening the interfacial water/oil film.

Veegum® is often used synergistically with gums and organic thickeners as it boosts their viscosity multiple times without increasing the dosage of these thickeners and gums. The viscosity or stability of formulations containing these mixtures is greater than that of the same formulation made with each component (separately) of the mixture.

These combinations allow the formulator to finetune viscosity, yield value, and flow properties beyond what is possible with either the clay or organic thickener alone. It has given wonderful results with thickeners like Xanthan Gum (Vanzan® NFC), Sodium CMC, Hydroxyethyl Cellulose (Hydrocel – H) and Biopol® – Carbomers to name a few.

This versatile excipient has found to be multipurpose for solid orals!

In solid dosage forms, they are traditionally used as a binder, disintegrant, moisture-controlling agents, lubricant and for increasing the dissolution profile for tablets.

These clays are also used in solid dosage forms as components of drug delivery systems, an application of increasing interest because these entirely natural excipients provide a unique combination of physicochemical properties for drug-clay interaction.

VEEGUM® thereby improves the shelf life and stability of the product. Due to the nature of the clay and its particles, it has helped solve the issue of increasing the dissolution of tablets, especially Albendazole Tablets.

With these features + compatibility with almost all APIs and raw materials + its active role in masking the bitter taste of the APIs, Veegum® has proved to be quite efficient in its functionality.

It gives the Formulators and Research Scientists multiple additional benefits and functions to work with making their life easier as we all know the process of product development is quite tedious and draining.

With rising customer demands, varied weather conditions across the globe and increased demand for stable and safe products all at the same time – Veegum® has taken the centre stage. It is popular amongst Formulators and Research Scientists due to its versatile and adept applications across the globe.

We at Pioma Chemicals, along with the consistent support from our valued supplier Vanderbilt Minerals LLC, are always on the lookout for new innovations which can make the product development an interesting task.

We ensure we come up with more user friendly ideas for our Customers and we hope to continue to do this for many more years to come.

Veegum® is the key win-win product for all entities and all personnel involved in product development and troubleshooting.